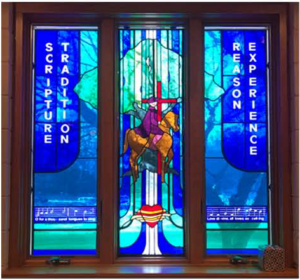 Located in Stillwater, “the birthplace of Minnesota”, our church’s history extends to the introduction of the Methodist faith in Minnesota. FIRST UNITED traces its roots to two separate congregations in the nineteenth century.  The congregation celebrated its 175th anniversary in 2021.

Methodist ministry in the St. Croix Valley began in 1841, and in 1846 the Methodist Episcopal Church began holding services in Stillwater under the leadership of Rev. J. W. Putnam. According to historical records, “The first church was built of unseasoned lumber at a cost of $1,332, and was dedicated November 1854.” A second, larger building, on North Third Street, took its place in 1870.

Meanwhile, Swedish-speaking Methodists began mission work in Stillwater in 1870.   This congregation built a church at the corner of Myrtle and Fourth Street that was dedicated in 1883. The congregations merged in 1945 and then worshiped together in the Myrtle Street building.

In 1955 the congregation purchased the Greeley Mansion on the corner of Greeley St. S. and Myrtle St. W. where the congregation built its current facility. The sanctuary was completed in 1960, and the building was expanded in 1992.

We are a neighborhood church and look forward to Wrapping the People of Stillwater in God’s Love for many years to come.